Just when you thought the pressure from AMD on Intel’s market dominance might be about to abate, yet more competition is building. The Zen 2 architecture is paying dividends across all levels of the processor business, from mobile to server. But it’s at the high end that Zen 2 particularly makes its mark. We’ve already taken a deep dive into what the latest generation of AMD EPYC has to offer for servers with its ability to deliver up to 64 cores per socket, but it has great potential for the workstation market too. Here, we take a first look at what 64 cores can do for content creation users with a system from British vendor Armari, catchily named the Magnetar R64ER-RS1280/LC.

To show what the new EPYC really has to offer, our review sample arrived with the top-end AMD EPYC 7742. This is a processor aimed at a dual-socket configuration, and you would be more likely to purchase this system with the much cheaper 7702P aimed at single sockets only, since this is a single-socket workstation. There’s not a huge difference between the two, apart from the significant 2,000 cost reduction for this system with the 7702P instead of the 7742. The 7742 has a 2.25GHz base clock and 3.4GHz turbo mode, where the 7702P has a 2GHz base with 3.35GHz turbo mode.

These nuances are overshadowed by the fact that both CPUs offer a whopping 64 cores and 128 threads. Putting this in perspective, Intel’s current Xeon Scalable range tops out at 28 cores, and those cost twice as much as the EPYC 7742, or more than three times as much as the 7702P. Intel has announced a 56-core Xeon Platinum 9282, but that’s currently only available through select datacentre- oriented server OEMs rather than for workstations, and likely to be an order of magnitude more expensive still.

So the 64-core EPYC is an incredible achievement for AMD, and putting this even further in perspective is the power envelope it operates within. The 7742 has a 225W TDP, and the 7702P requires 200W. But the 56-core Intel Xeon Platinum 9282 has a 400W TDP whilst the fastest 28-core 8284 is 240W. On paper, therefore, the EPYC is incredibly power-efficient, so your electricity bill will be lower too.

However, things aren’t quite as simple as that. Although Intel processors have clearly defined frequencies that different numbers of cores can run at – two at the top frequency, then four at the next one down etc – AMD’s processors are much more complicated. The consumer-grade processors and Threadrippers offer Precision Boost. This clever system learns the capabilities of your motherboard power supply and CPU cooling to dynamically control the frequency of each core according to what the system can handle without throttling, so if you have really meaty water cooling you can get better performance.

The EPYC range doesn’t have Precision Boost in such an aggressive way, but it does have something called cTDP which acts in a similar fashion and has to be turned on in the BIOS. Because the AMD EPYC range is more concerned with stability, if you have meaty cooling you can enable a higher TDP and more cores will run at a higher clock frequency. For the 7742, the regular TDP is 225W, but the cTDP is 240W, which Armari has enabled here. The 7702P, however, only offers a 200W setting, so will generally run at a lower clock compared to the 7742.

Armari’s R80 chassis is designed to fit 240W-capable liquid cooling so that CPUs like AMD’s can get the best performance possible, and this comes in the form of an Enermax Liqtech unit. During testing, we saw all 128 threads hit 3.35-3.4GHz consistently, and this was still a surprisingly quiet system. Another advantage of the new 2nd-generation AMD EPYC is that it now officially supports 3,200MHz DDR4 memory. The architecture sticks with eight channels, but this is still two more than Intel’s Xeon Scalable’s six channels, although the recently announced Cascade Lake-AP version sports 12 channels. Armari has equipped the R64ER-RS1280/LC with eight 16GB modules of 3,200MHz DDR4 ECC Registered SDRAM. This takes up all the available slots, but 128GB of RAM isn’t going to need an upgrade anytime soon anyway. 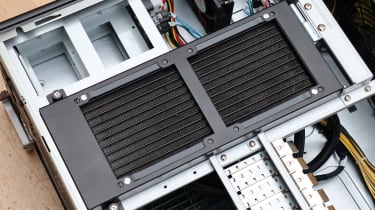 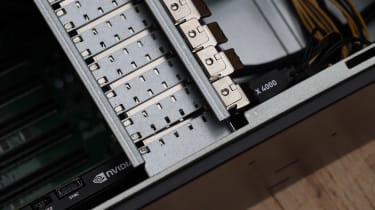 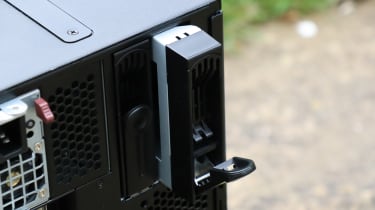 Armari has played it safe with graphics acceleration. Since this system is more likely aimed at rendering than constant modelling, an NVIDIA Quadro RTX 4000 has been supplied rather than the higher-end 5000. The RTX 4000 takes up the usual slot for Quadro 4000-series GPUs as the affordable high-end choice.

The RTX version sports a commendable 2,304 CUDA cores running at a base 1,005MHz with a 1,545MHz boost. There’s 8GB of GDDR6 frame buffer on board, operating at an effective 13,000MHz, providing a hefty 416GB/sec of bandwidth. Despite the powerful GPU and fast memory, this is still a 160W TDP card, so is reasonably frugal on power consumption as well. It should still provide some very usable 3D modelling ability and a decent level of CUDA or OpenCL compute if needed.

Although this system has plenty of room for storage, of which more later, Armari has chosen to supply just a boot drive in the shape of a Samsung PM981 1TB NVMe M.2 SSD. One of the benefits of the new EPYC is that this system supports PCI Express 4.0, but the choice of NVMe storage with a PCI Express 4.0 interface is not yet that great, so Armari has opted for the Samsung due to known dependability. This drive still managed sequential reading at 3,269MB/sec in CrystalDiskMark 6, with sequential writing at 2,378MB/sec, so it’s hardly a slouch. However, we’ve seen PCI Express 4 NVMe SSDs achieving 50% faster throughput.

The R64ER-RS1280/LC is built around Armari’s custom-designed R80 workstation chassis, which is a very solid steel box that can also be configured as a rackmount, although you can’t use water cooling in rackmount configuration due to the location of the radiator and vents on the case. Befitting the serious focus of this system, a 1,280W modular power supply is integrated that can simply be slid out the back if it needs to be changed.

This chassis also has a couple of cold-swap 3.5in drive bays accessible from the rear, plus two 2.5in cold-swap bays at the front. By default, these are for SATA or SAS drives, but can optionally be reconfigured with NVMe U.2 backplanes. There aren’t any more bays inside the case, but with two PCIe Gen4-capable M.2 slots on the ASRock ROMED8-2T motherboard as well, you’ve got space for up to six drives, so plenty of room for workstation-level capacity and RAID 0 or 1 configurations if desired. Unsurprisingly, there’s no room for a 5.25in optical drive at all.

The front of the case sports two USB 3.1 Gen1 ports, with minijacks for headphone and microphone. The motherboard supplies a healthy selection of rear ports, including two 10Gbit LAN connections and another RJ45 aimed at IPMI management. There’s a VGA port plus two USB 3.1 Gen 1 and a single USB 3.1 Gen2 Type C. There’s even a COM port for hardware management systems that still use this interface.

The two obvious comparisons in our recent reviews are Armari’s own Magnetar X200 and the PC Specialist Axiom. However, the Intel Xeon W-3175X in the X200 appears to have been discontinued already, and the Axiom costs more than twice as much as this system. So this should put our performance results in some perspective.

In our Media Benchmarks, where the X200 managed 678, the R64ER-RS1280/LC achieved an overall score of 618, with an image result of 176, video encoding result of 581, and multi-tasking score of 790. Image editing is the weakest here, held back by the single-core clock speed that can’t keep up with processors that have fewer cores but run them a lot faster. However, considering that you can’t get the X200 anymore, the fact that the R64ER-RS1280/LC is second fastest to it is moot. The Axiom only managed 471 overall, with lower scores in every category, so for everyday tasks other than image editing, this is the fastest workstation you can currently buy that we’ve tested.

However, this does come with a caveat that became evident when we tried some other CPU-focused tests. The Blender Gooseberry 3D render took 564.69 seconds, which is noticeably faster than a 32-core Ryzen Threadripper, but not by as much as you’d expect, and the X200 finished this render in 409.7 seconds. It’s clear that Blender isn’t giving the full benefit of 128 threads, and the Geekbench 4 scores of 4,398 single-threaded or 35,492 multi-threaded also illustrates a similar theme. This makes sense compared to the Axiom, which has a faster single-core clock but fewer cores, so has a better single-threaded result and slower multi-threaded. But the X200 managed 80,509 multi-threaded with only 56 threads, so this test clearly doesn’t get the full benefit of lots of cores.

Overall, it’s the multi-threaded performance that is the real benefit here, thanks to those 64 cores and 128 threads. However, you will need to ensure you use software that can take full advantage of them. If not, a workstation with higher single-core clocks, based around Intel’s recently-released Core i9 10980XE, the AMD Ryzen 3000 series or soon-to-arrive third-generation Threadripper might be more suitable. But that takes nothing away from what has been achieved here. AMD has packed a gobsmacking amount of compute power into a single socket, and for tasks that can make use of all the threads, this is an awesome amount of performance for the money.

*Required fields
We use cookies on our website to give you the most relevant experience by remembering your preferences and repeat visits. By clicking “Accept All”, you consent to the use of ALL the cookies. However, you may visit "Cookie Settings" to provide a controlled consent.
Cookie SettingsAccept All
Manage consent

This website uses cookies to improve your experience while you navigate through the website. Out of these, the cookies that are categorized as necessary are stored on your browser as they are essential for the working of basic functionalities of the website. We also use third-party cookies that help us analyze and understand how you use this website. These cookies will be stored in your browser only with your consent. You also have the option to opt-out of these cookies. But opting out of some of these cookies may affect your browsing experience.
Necessary Always Enabled
Necessary cookies are absolutely essential for the website to function properly. These cookies ensure basic functionalities and security features of the website, anonymously.
Functional
Functional cookies help to perform certain functionalities like sharing the content of the website on social media platforms, collect feedbacks, and other third-party features.
Performance
Performance cookies are used to understand and analyze the key performance indexes of the website which helps in delivering a better user experience for the visitors.
Analytics
Analytical cookies are used to understand how visitors interact with the website. These cookies help provide information on metrics the number of visitors, bounce rate, traffic source, etc.
Advertisement
Advertisement cookies are used to provide visitors with relevant ads and marketing campaigns. These cookies track visitors across websites and collect information to provide customized ads.
Others
Other uncategorized cookies are those that are being analyzed and have not been classified into a category as yet.
SAVE & ACCEPT