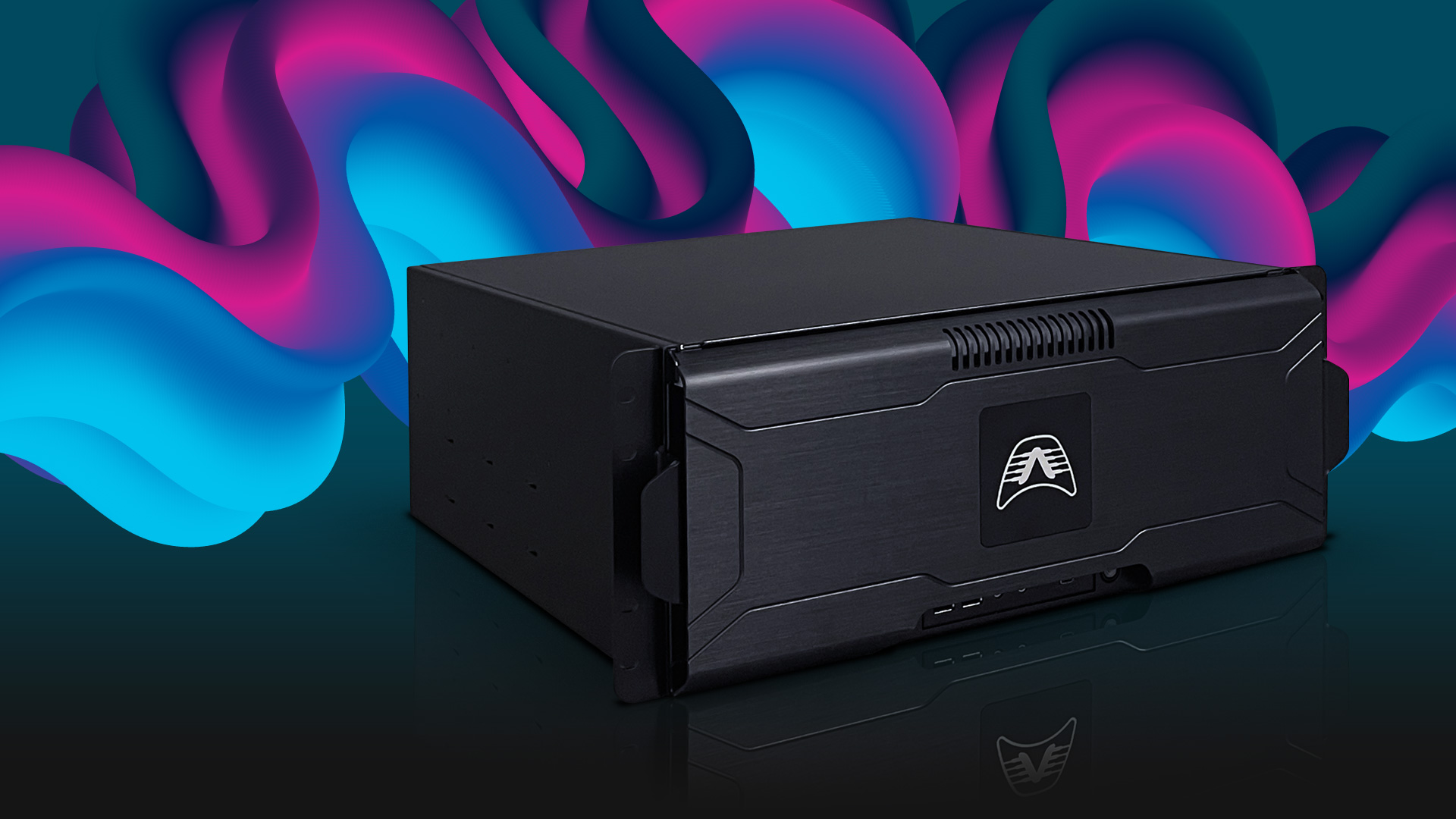 With a clock speed of 3.7GHz the Armari Magnetar R80 delivers the goods in single threaded workflows, writes Greg Corke

The phrase custom workstation manufacturer means different things to different people. There are many firms that simply take off-the-shelf PC components, throw in a professional graphics card and call it a workstation. But there are very few that take customisation to the level that Herts-based Armari does.

Armari is well known for designing its own custom chassis — the slimline VR-focused Magnetar V25 that we reviewed in 2017, for example, features a dedicated pocket for the HTC Vive link box. But you may not know that the company goes even deeper into customisation, making bespoke components for its workstations such as PCIe riser boards, heat sinks and PSU cable looms.

In its brand new Magnetar R80 workstation it is looking to get the most out of two power-hungry Xeon Scalable CPUs by letting them run at full frequency when all cores are being used. Liquid cooling is the obvious answer but while there are many off the shelf liquid coolers for consumer CPUs, when it comes to the new Xeon they simply don’t exist, as the volumes are not there. As a result, Armari is developing its own custom liquid cooling system so the CPUs can run at turbo speed on all cores, rather than just the usual one or two.

Unfortunately, the custom cooling solution is still being manufactured, so Armari sent in a pre-production machine with air cooling instead. This means that instead of the two Intel Xeon Gold 6154 processors running all of their 18 cores at 3.70GHz (which Armari says it will achieve once the custom cooling system is ready), clock speeds on this air-cooled system will be a touch slower. But not that much slower. On test, it managed to maintain around 3.5GHz even after we had been rendering a complex KeyShot scene for over an hour.

Rendering performance is virtually identical to the dual 32-core AMD Epyc-based Boston workstation. The Magnetar R80 completed the V-Ray benchmark in 21 seconds and our KeyShot test render in 94 seconds.

However, because it attains this level of performance with fewer CPU cores running at a higher frequency, it beats the Boston machine hands-down in a single threaded race. With a single core clocked at 3.70GHz, it was 32% faster in our SolidWorks IGES export test.

Notably, it was also only 17% slower than the Fujitsu Celsius W570power+, a typical CAD workstation with a quad core Intel Core i7-7700 CPU (3.6GHz up to 4.2GHz) and Nvidia Quadro P4000 GPU. Keeping clock speeds relatively high also benefits 3D graphics performance in CPU limited applications like SolidWorks. In shaded with edges mode, for example, the machine was only a touch slower than the Fujitsu and is almost certainly powerful enough to handle anything you can throw at it as far as 3D CAD is concerned.

In GPU hungry applications like Autodesk VRED Professional, however, it’s the high-end Vega-based AMD Radeon Pro WX 9100 that does all the heavy lifting, delivering solid scores on par with the Quadro P4000-based BOXX APEXX S3.

The combination of 3.70GHz CPU and Radeon Pro WX 9100 GPU also makes this machine capable of powering VR on the HTC Vive or Oculus Rift. In the VRMark benchmark it excelled in the DirectX 12-based Cyan test, delivering a score over and above the Nvidia Quadro P5000. This is good news for those using the Unreal or Unity game engines for viz or VR as these applications are likely to move to DirectX 12 soon. However, in the orange room it was slower than we expected, as it was in other DirectX 11 game engine applications — LumenRT and Autodesk Revit Live.

To explore if this was a driver issue, we changed the 17.Q4 driver for the 17.Q4.1 driver, which is the one recommended for the similar AMD Radeon Vega Frontier Edition. Performance immediately rose significantly in Autodesk Revit Live, LumenRT and VRMark orange room. However, as 17.Q4.1 is not the recommended driver for the Radeon Pro WX 9100 we would not advocate its use in a professional environment. It looks like AMD might need to do some driver tweaks here. Interestingly, we did not experience anywhere near the same kind of slow down when using the Radeon Pro WX 9100 with the 17.Q4 driver on an Intel Core i5-4690K-based workstation so it may be a chipset compatibility issue (the Intel C621 chipset is very new).

In VR itself, it performed well, working perfectly fine in Revit Live, an application the Radeon Pro WX 7100 struggles with. In Autodesk VRED Professional it could handle all of our test models, but with anti-aliasing enabled we only got a flicker free experience with smaller models.

The Radeon Pro WX 9100 is also well suited to GPU rendering, but it depends on the application. In the V-Ray benchmark, which uses an experimental OpenCL mode, performance was significantly slower than a Quadro P4000. However, in Radeon ProRender, a free GPU OpenCL renderer developed by AMD, it edges out a Quadro P5000.

To boost GPU rendering performance, you can add a double and a single slot GPU. In our test machine, however, it’s limited to a second WX 9100 or two WX 7100s, as the fourth slot is taken by a high performance 480GB Intel Optane 900P PCIe SSD. There’s also a 4TB Western Digital Gold Datacenter HDD for storing the bulk of your data. The test machine came configured with 192GB of memory, filling 12 out of the 16 DIMM slots with 16GB DDR4-2666 ECC modules to make the most of the Xeon’s six-channel memory architecture.

For a machine with such high computational potential, the chassis is surprisingly small. And despite having to cool two 200W CPUs and a 230W GPU (as well as memory and storage) fan noise is really not too distracting. We imagine it will get even quieter with liquid cooling.

The chassis has some nice touches, such as the long and slender rack server class 1,280W power supply, which pulls out from the rear of the machine, making it very easy to change in case of a failure. There are also two front-loading 2.5-inch drive bays that can be accessed easily.

Overall, the Magnetar R80 looks to be a phenomenal machine for digital artists, offering incredible performance for ray trace rendering without having to sacrifice performance in single threaded workflows. There’s also a powerful VR capable GPU. And while it looks like there is some work to do in DirectX performance, one must not forget that this is a pre-production machine.

Incredibly, there’s more to come. When Armari starts shipping the machine with liquid cooling (scheduled for Feb 2018) and all core speeds rise to 3.70GHz, it looks destined to set a new DEVELOP3D benchmark record for desktop rendering.

*Required fields
We use cookies on our website to give you the most relevant experience by remembering your preferences and repeat visits. By clicking “Accept All”, you consent to the use of ALL the cookies. However, you may visit "Cookie Settings" to provide a controlled consent.
Cookie SettingsAccept All
Manage consent

This website uses cookies to improve your experience while you navigate through the website. Out of these, the cookies that are categorized as necessary are stored on your browser as they are essential for the working of basic functionalities of the website. We also use third-party cookies that help us analyze and understand how you use this website. These cookies will be stored in your browser only with your consent. You also have the option to opt-out of these cookies. But opting out of some of these cookies may affect your browsing experience.
Necessary Always Enabled
Necessary cookies are absolutely essential for the website to function properly. These cookies ensure basic functionalities and security features of the website, anonymously.
Functional
Functional cookies help to perform certain functionalities like sharing the content of the website on social media platforms, collect feedbacks, and other third-party features.
Performance
Performance cookies are used to understand and analyze the key performance indexes of the website which helps in delivering a better user experience for the visitors.
Analytics
Analytical cookies are used to understand how visitors interact with the website. These cookies help provide information on metrics the number of visitors, bounce rate, traffic source, etc.
Advertisement
Advertisement cookies are used to provide visitors with relevant ads and marketing campaigns. These cookies track visitors across websites and collect information to provide customized ads.
Others
Other uncategorized cookies are those that are being analyzed and have not been classified into a category as yet.
SAVE & ACCEPT